On 29th of January 2016 Delamode Baltics was awarded the GAZELE certificate for the fifth consecutive year. Delamode Baltics continues to be recognised as one of the leading and most successful and fastest growing Lithuanian SME companies. During the last 3 years Delamode has recorded an impressive 260% growth rate.

The Gazele awards are organised by the leading Lithuanian business daily newspaper, Verslo Zinios. During the official ceremony winners were presented their certificates by Lithuanian president Dalia Grybauskaite.

Delamode Baltics are ranked in 231st place in Lithuania, which is out of more than 4,000 companies. The reason for the award is 260% growth over last 3 years.

For more information, please click on the below link: here 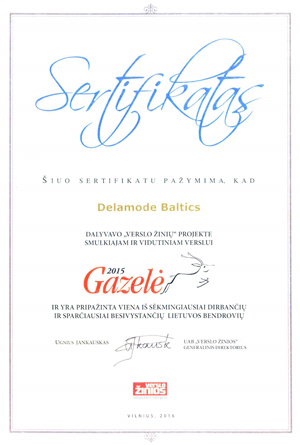 This site uses cookies to provide you with a more responsive and personalised service. By using this site you agree to our use of cookies as set out in our Privacy & Cookie notice. Read more